Lake Erie perch charters, perch fishing on Lake Erie is catching two and even three perch at a time on spreaders. Daily perch limits of 30 per person, catches of yellow perch can soar into the hundreds in a couple of hours!
{ Lake Erie Perch Fishing is a good choice for kids – lots of action } 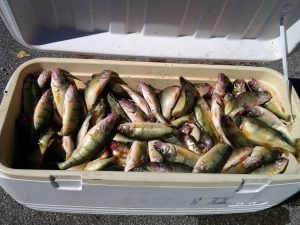 It’s summer on Lake Erie and yellow perch fishing is turning on. Everyone knows that yellow perch love one of Lake Erie’s most abundant baitfish, emerald shiners. When “lake shiners,” as they are commonly called at the bait stores, are available, anglers buy them buy the scoopful and go through dozens, if not hundreds, in a good day of fishing.

There are times, though, that emerald shiners either aren’t available, or are available in very limited quantities. The problem arises when conditions make the popular baitfish hard to catch. Most shiners are caught by lighting up the water at night and then netting the shiners that swim into the light. Factors that make shiners tough to catch include clear moonlit nights with lots of ambient light that reduces the ability of netters to attract the shiners, along with other lake condition issues such as thick algae blooms that reduce the water’s clarity or wind that makes it too rough to go out at night and catch shiners. If you plan on going perch fishing on Lake Erie, you need to plan for the circumstance that your favorite bait store might not have emerald shiners, regardless of why they don’t have them.

The most common, but possibly least popular, solution to the problem is to buy golden shiners, or “goldies” as they are commonly called. Golden shiners are hauled up to Lake Erie from southern bait farms and are generally available when emerald shiners aren’t. The problem is that most anglers feel like yellow perch don’t bite as well on goldies, and they usually cost more because of the expense of shipping them so far. I would argue that they are better than not having bait, but I also would probably seek other alternatives.

Some of the alternatives require previous preparation, but they might be your best options. In times that shiners are abundant and readily available, some anglers will either freeze batches of shiners or preserve them in salt concoctions called brine. Either option offers a great alternative to buying goldies or using artificial bait, and will definitely make you the hero on your boat if you had the forethought to preserve unused bait from a prior trip. A simple Google search for “brine for preserving shiners” will result in plenty of how-to recipes for salting your own shiners. Whether frozen or salted, don’t be hesitant about using “dead” shiners. I know some yellow perch anglers that prefer to use dead shiners over live shiners, even if they are fresh.

If you didn’t have the foresight to preserve your own bait, there are other options. Even though artificial baits are less popular among yellow perch anglers, it doesn’t mean that they won’t save your day of fishing. Be open-minded and fish them differently than you would live shiners. Start out with minnow-imitating soft plastics, such as Berkley Gulp Alive. Instead of fishing the soft plastic on a bare hook under a perch spreader, try two different options. They can be hooked on a drop-shot rig similar to popular smallmouth bass drop-shot fishing. Put a 1-ounce weight on the end of your line and tie a drop-shot hook 6- to 18-inches above the weight with a Palomar knot. Keep the weight on or near the bottom and shake your rod tip to give the plastic action. Also, try a small weighted jigging spoon with a 6- to 8-inch leader tied on the bottom where the hook would normally be. Put a single hook on the end of the leader with the soft-plastic minnow imitator. Drop the spoon and soft plastic near the bottom and occasionally rip the spoon upward allowing it to flutter back down.

If all else fails, you can keep a few non-target fish such as white perch. Cut thin strips of meat off of the “junk” fish to use as perch bait. Make sure the strip is shiner-sized, or smaller, and use it on a perch spreader or with either of the methods mentioned above. Keep in mind that it is illegal to throw fish carcasses into the lake, so keep the rest of the junk fish carcass in your cooler to dispose of properly at home. Also keep in mind that you’ll need to use non-target fish that are caught legally and are of legal size. Don’t use an undersized sport fish for bait!

You might end up being surprised by how well some of these alternatives will work. Remember that it is still most important to find a big school of perch with your electronics. It won’t matter what bait you’re using if you aren’t fishing where the perch are. The best option is to try some alternatives on days that fishing is really good, especially when you have live emerald shiners. When you’re really catching them good, rig up a second rod and try some of the baits or techniques mentioned above. Once you’re adept at catching yellow perch on multiple techniques, you’ll be much more confident the next time that you aren’t able to find shiners in the bait stores. 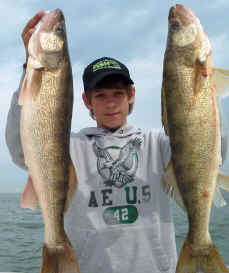